I had a booth at the Fall Arts & Craft show at St. Monica Church in Converse TX. 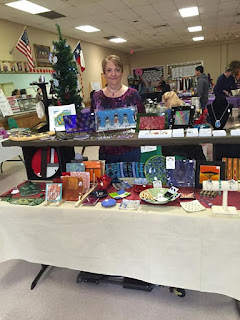 Posted by Glass Intrigues at 11:13 PM No comments:

Primary Colors and then some...

There are 6 colors in this bowl. I wont go into the technical details of how I made this but I will tell you there was a lot of cutting on the tile saw. The bowl measures 8" in diameter and is about 1-1/2" deep. It makes me happy! 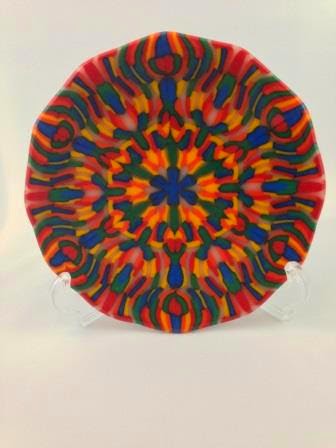 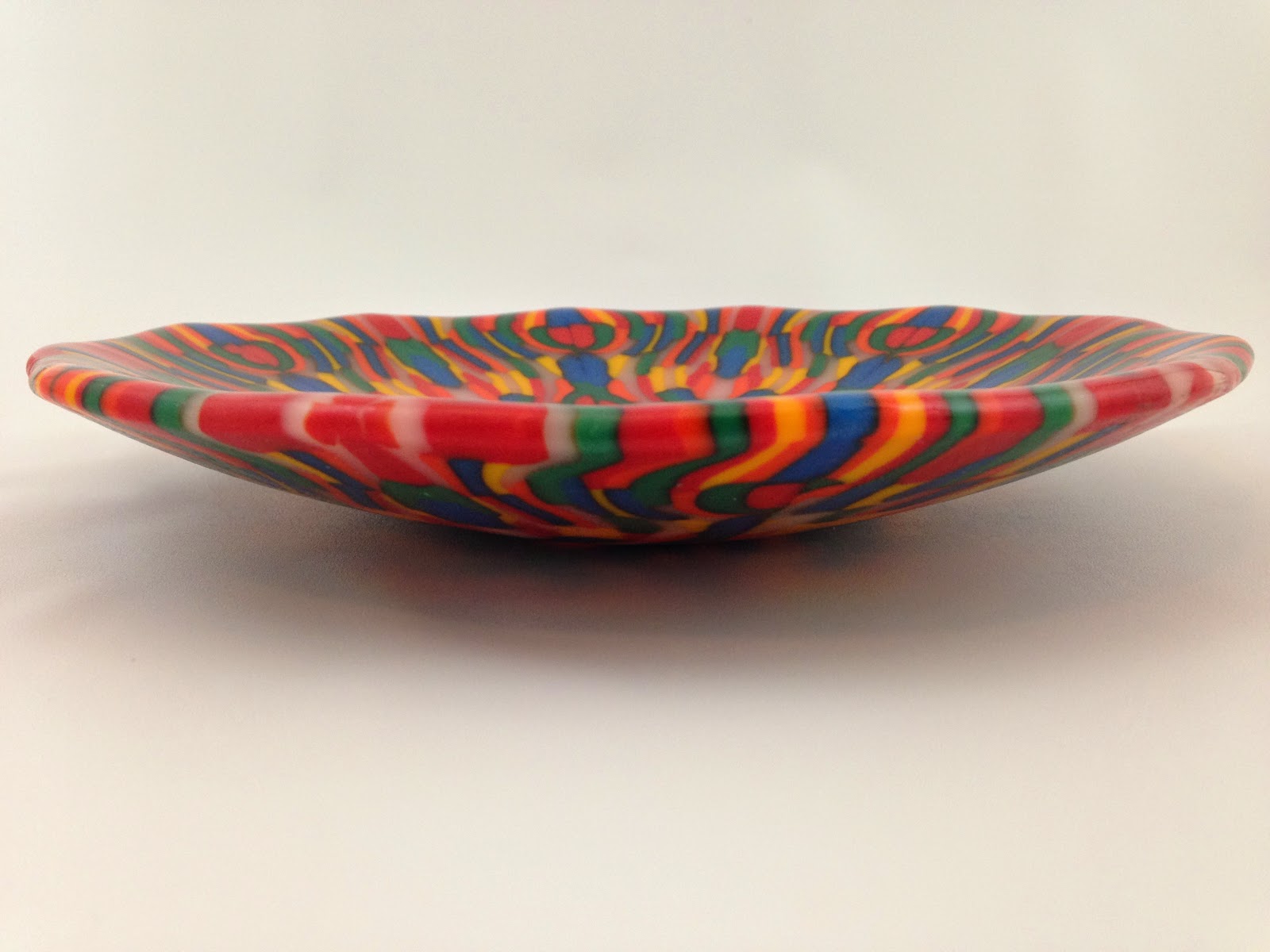 Posted by Glass Intrigues at 11:52 PM No comments:

Just a few pictures of some of the things I've been working on.


The Kaleidoscope was created from a wedge type pattern bar which was cut on the tile saw and assembled. I finished the piece using a technique of strip construction. The glass is cut into strips and then stand them on edge and fuse them together.

The three windows in Fiesta started out as sheet glass which I decorated with stringers (long thin pieces of glass), frit (ground glass) and confetti (very thin pieces) glass. It was fused, cut into strips, assembled and fused again to form a block of glass that was again cut on the tile saw and inserted between sheet glass.


This piece was created using a technique that was developed by David Alcala. I took a 2 hour class from a local studio and learned the basics to create a landscape out of glass frit which is finely ground glass. 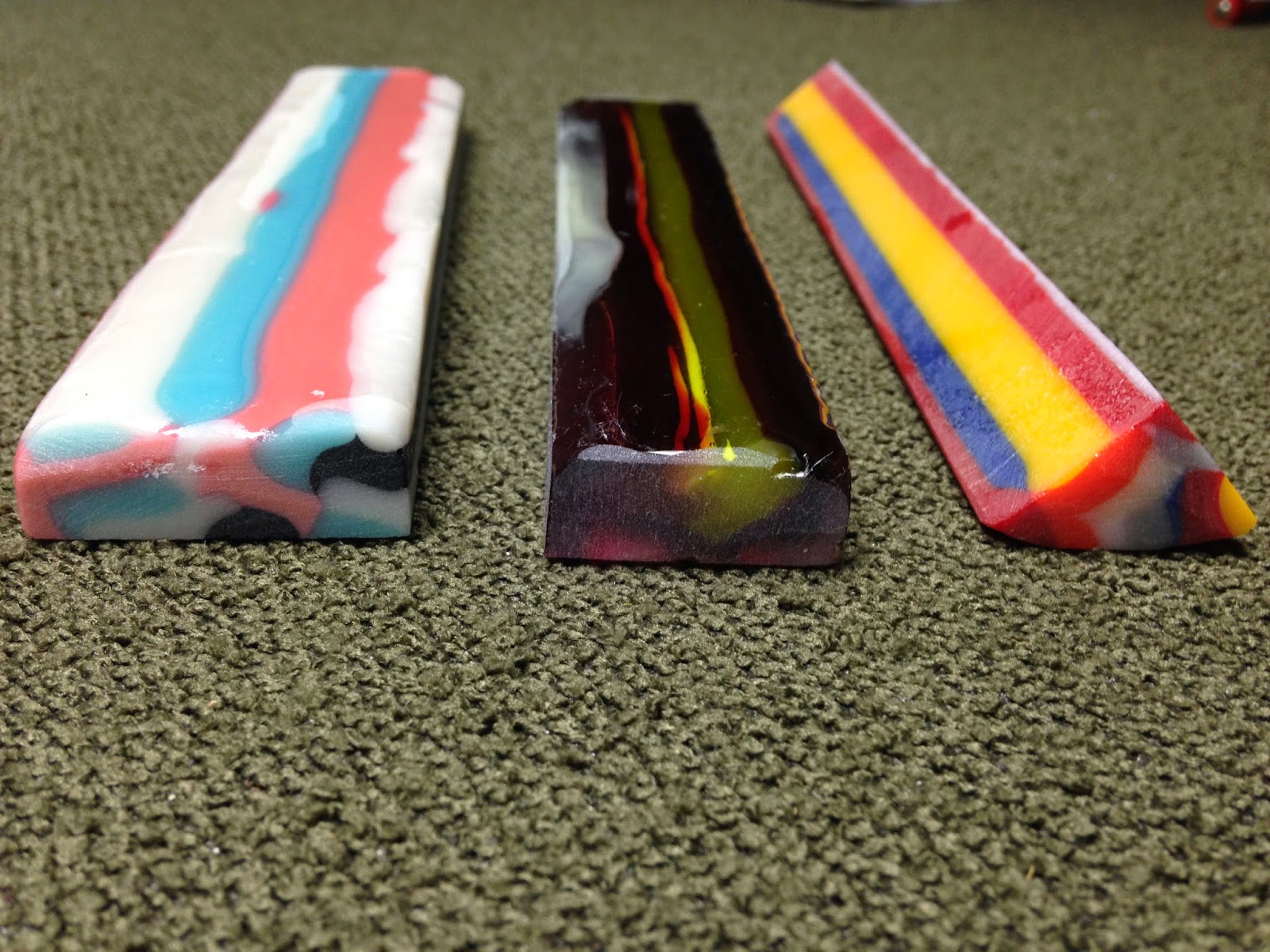 And last, here are three pattern bars. They don't look like much right now but they will be cut on the tile saw and assembled to make a pattern which will be used as a design element in 3 different projects.
Posted by Glass Intrigues at 11:29 PM No comments:

In this piece I used pieces from the same flow bar as my previous post. It is finished using sheet glass and strip construction. It still needs to be cold worked and fire polished but I thought I would share. 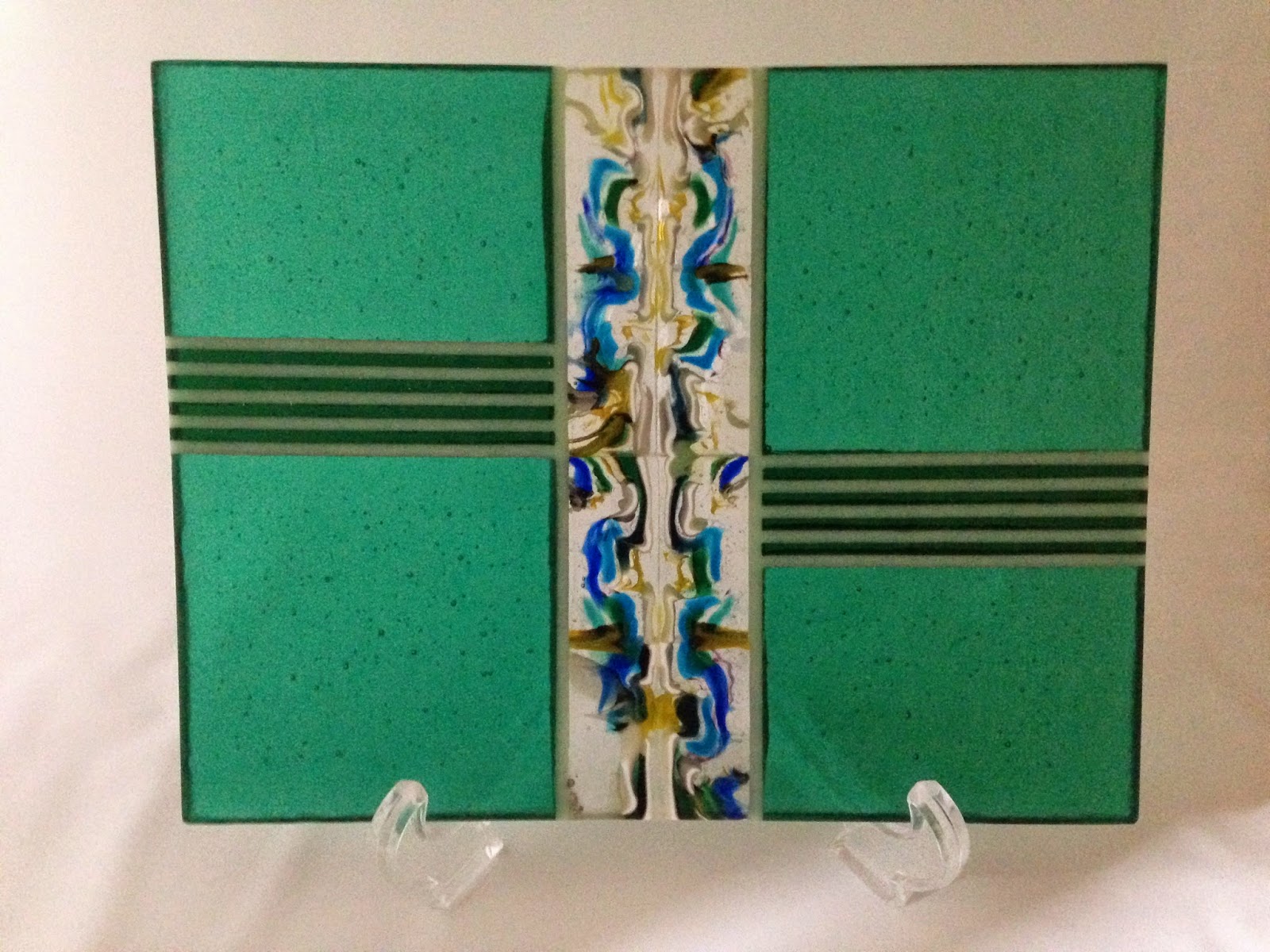 Posted by Glass Intrigues at 4:39 PM No comments: 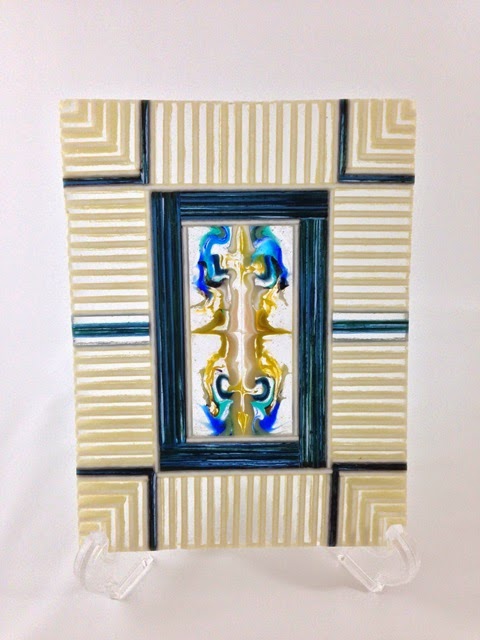 The center of this piece was made by a technique called a flow bar. The kiln is heated to 1700 degrees which will cause the glass to flow and swirl a bit. You start by building a dam so the glass will be contained. At that temperature, the glass is probably the consistency of honey. If you don't dam, the glass will spread out to be a quarter of an inch thick. 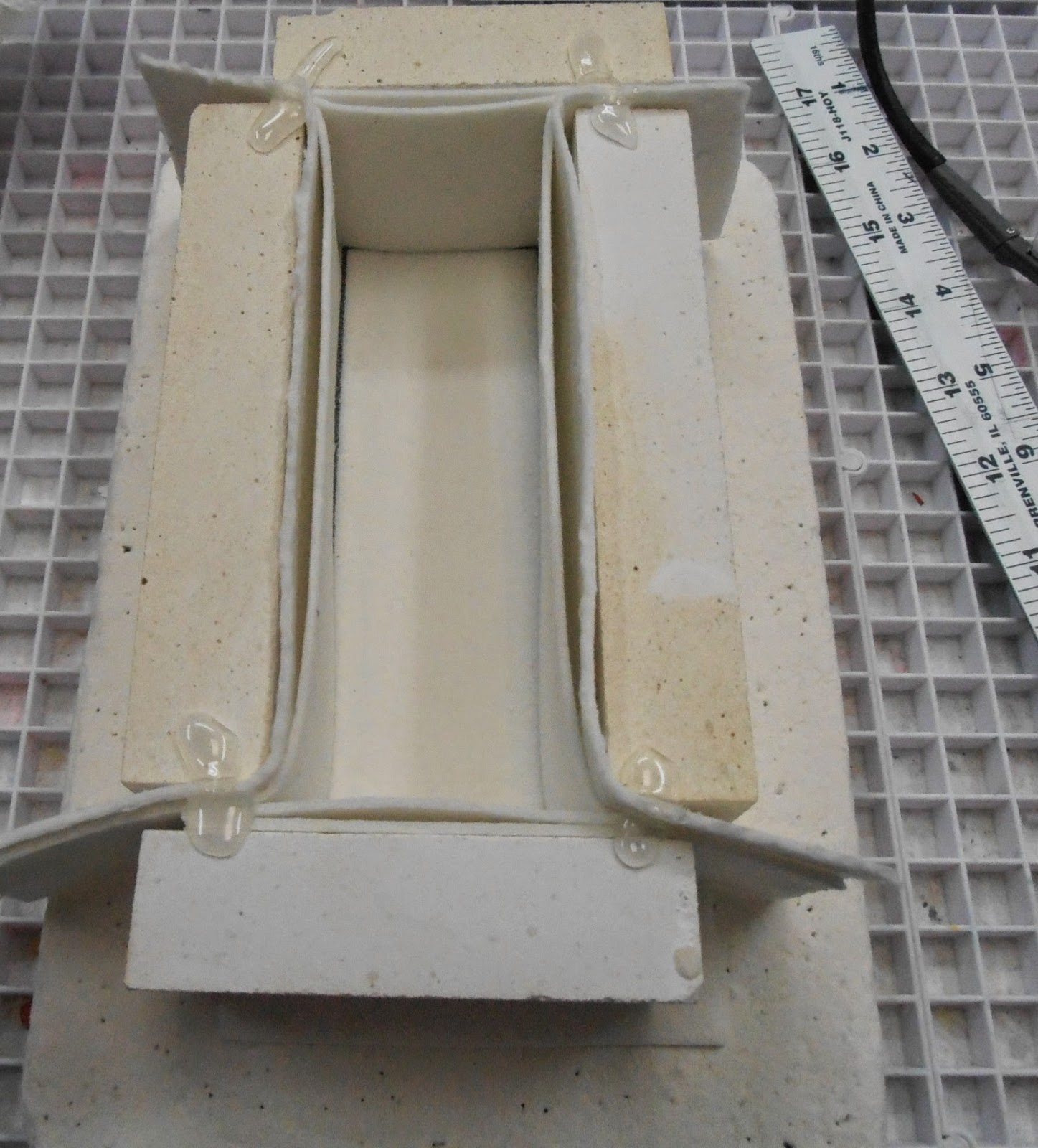 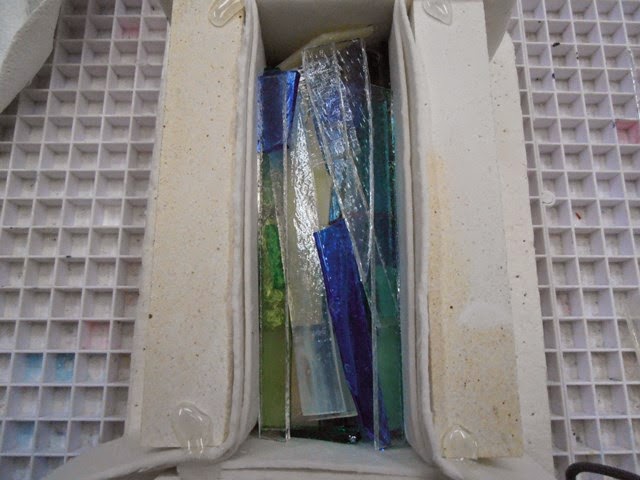 Then you add random strips of glass finishing it with a lot of clear. This is what the flow bar looked like before it went into the kiln.

Here is what it looked like after it came out of the kiln and the dam removed. Then it was sliced on the tile saw into 3/8" wide pieces and then laid out to form a pattern. I had to grind the pieces on the flat grinder to square them up so they would align better`.

Now I begin putting it all together. I cut lots of strips of clear and French Vanilla and arrange them on end. There was quite about of re-arranging going on until I came up with the final design. 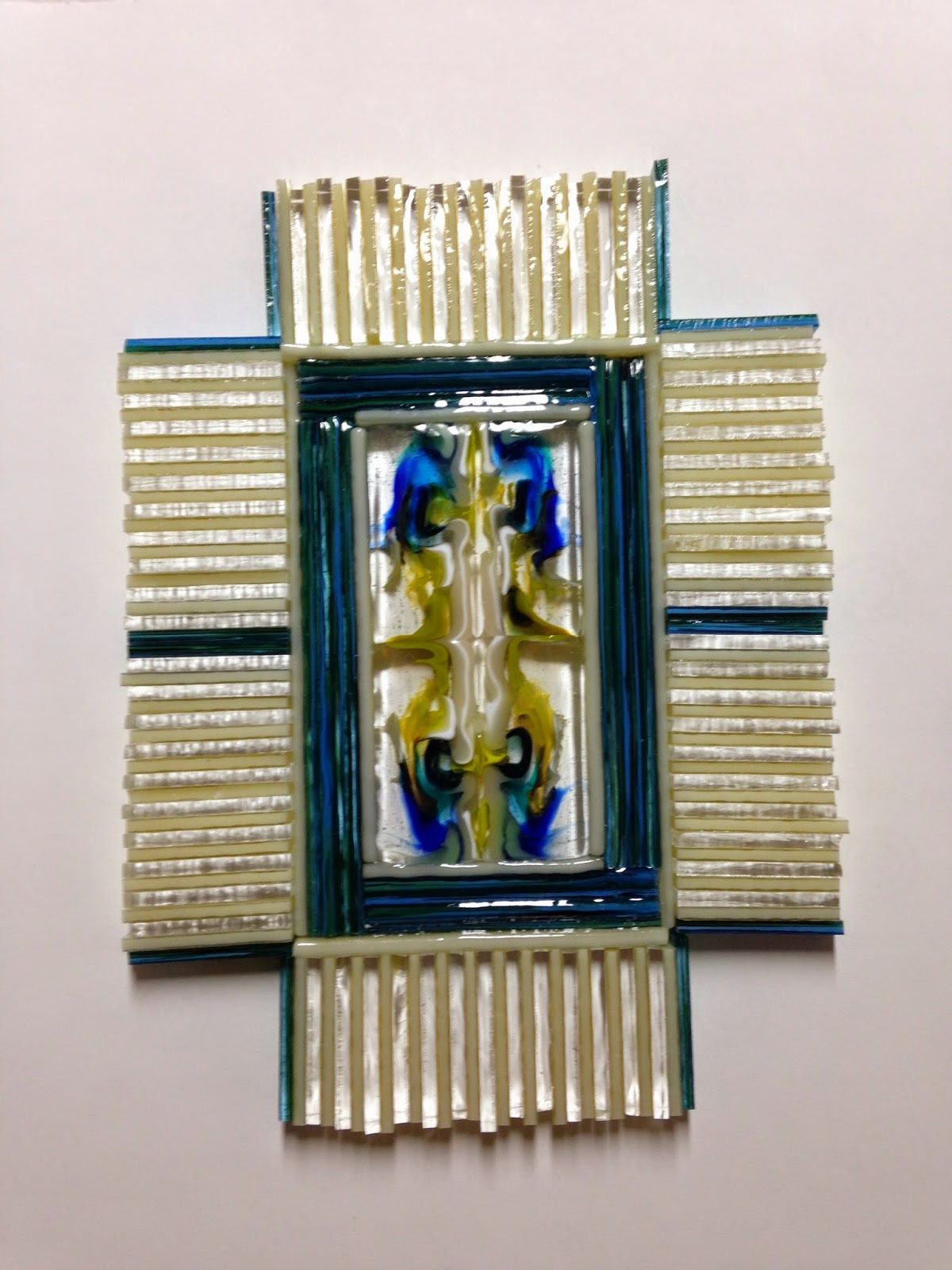 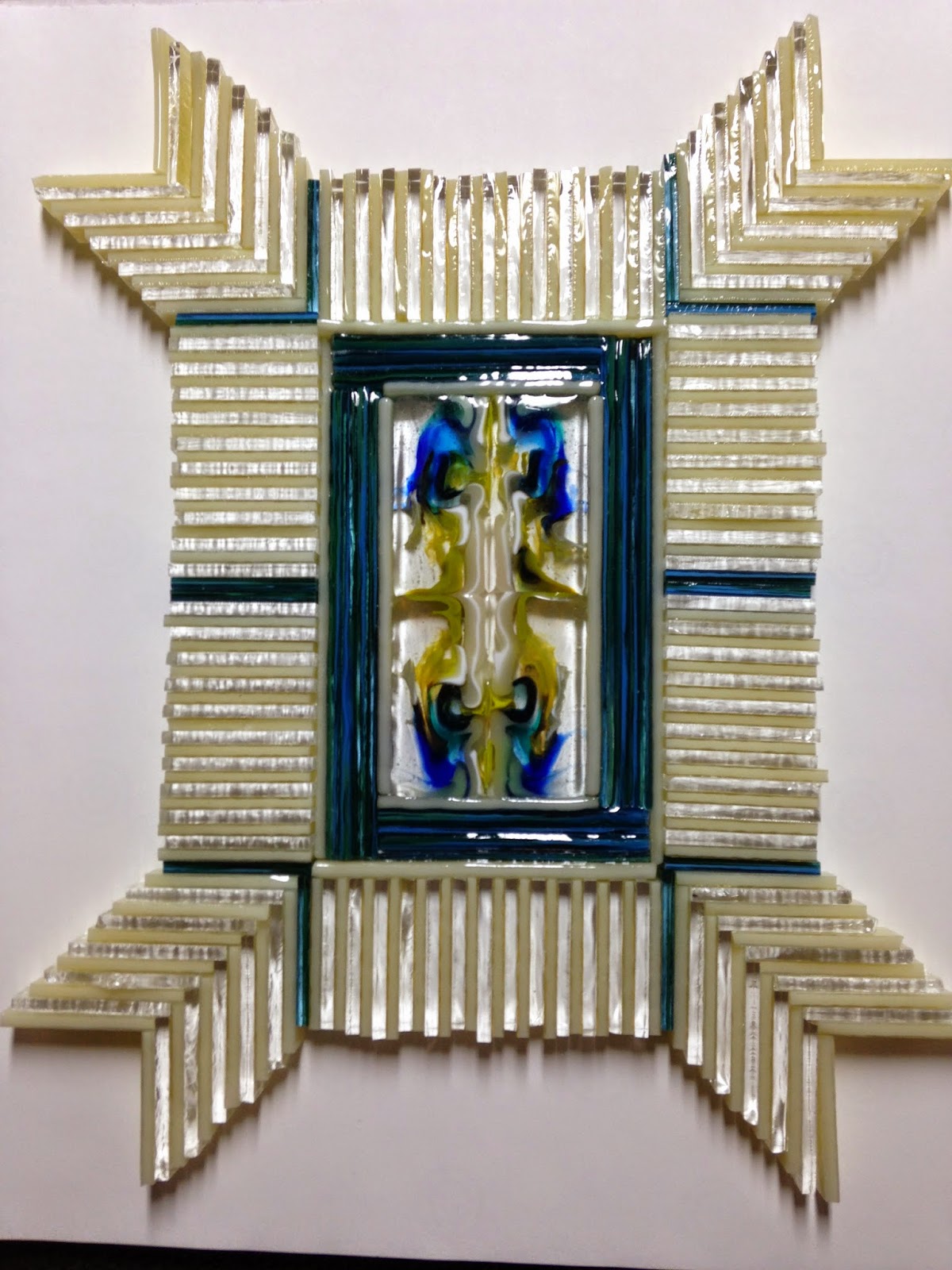 So now my design is complete. Although all my pieces are not exactly the same length at this point. they will fuse together and I will cold work the piece and cut the edges with a tile saw. Now in order to stop the glass from flowing, I needed to build a dam around the entire piece and secure it so it doesn't move during fusing. Due to the odd shape, conventional dams wouldn't work on this project.

This was accomplished by using fiber paper and straight pins. I built the piece on a piece of fiber board so I would be able to insert pins to keep the glass from shifting as it heats. Here it is in process of being dammed. You have to make sure all the pieces are pushed against the center piece and wrap the fiber paper tightly around securing with the pins. 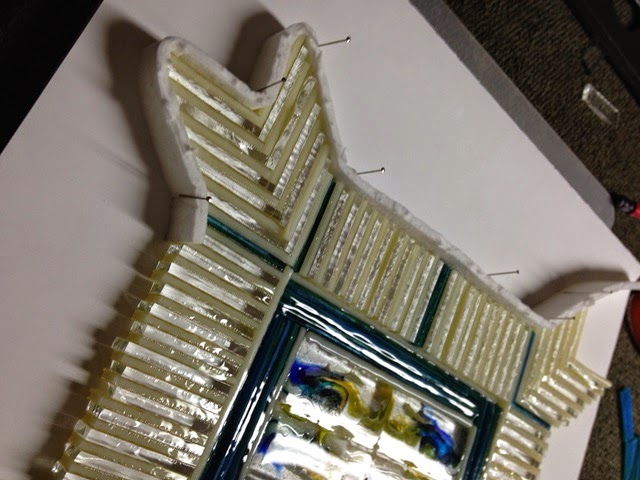 After carefully wrapping the glass in the fiber paper and securing with way too many pins, it is now in the kiln ready to be fired. 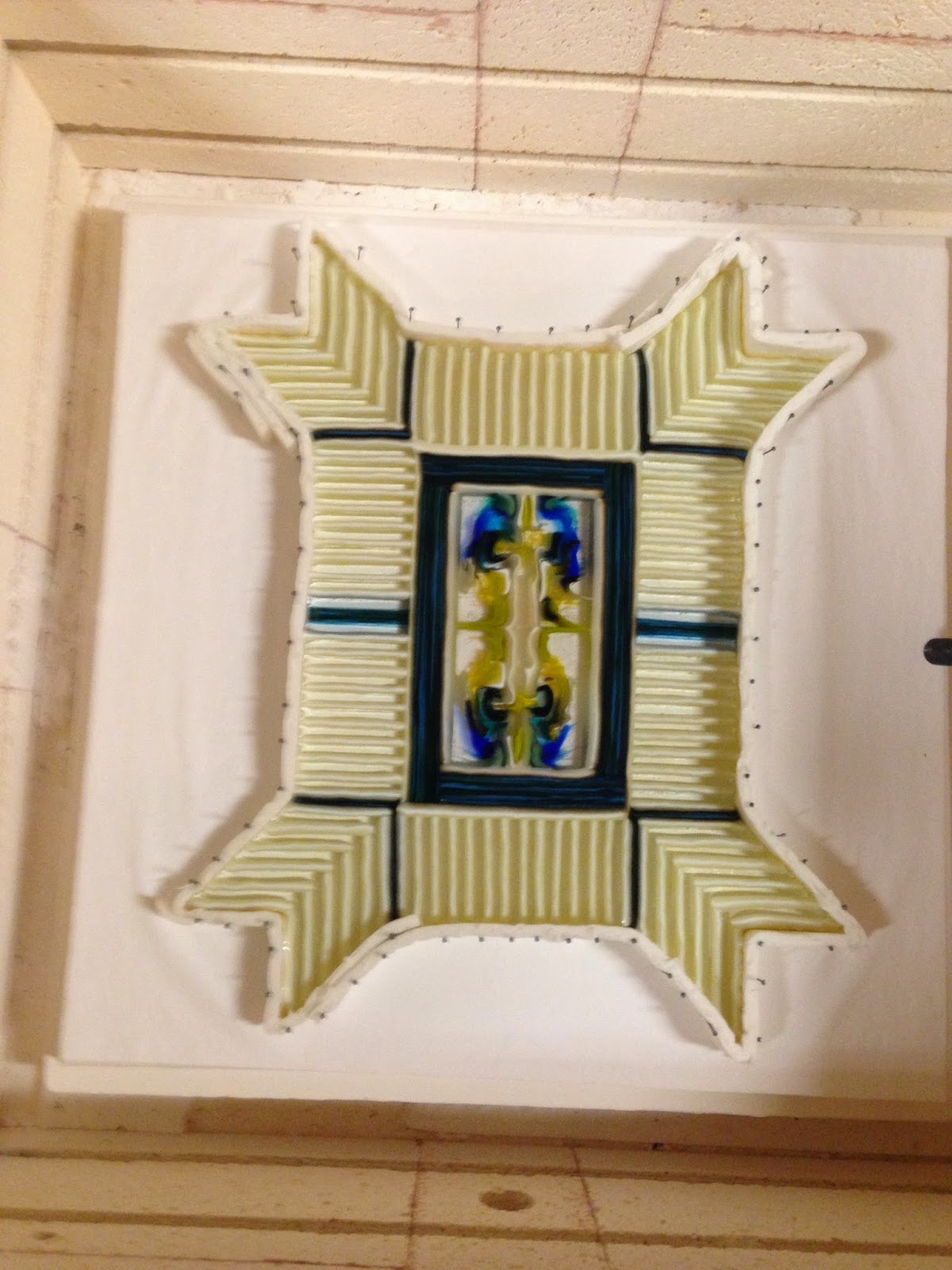 After about 18 hours in the kiln, it has now cooled and is ready to be cut. The following picture shows what it looked like after I cut the corners off and to give you an idea how thick it is. 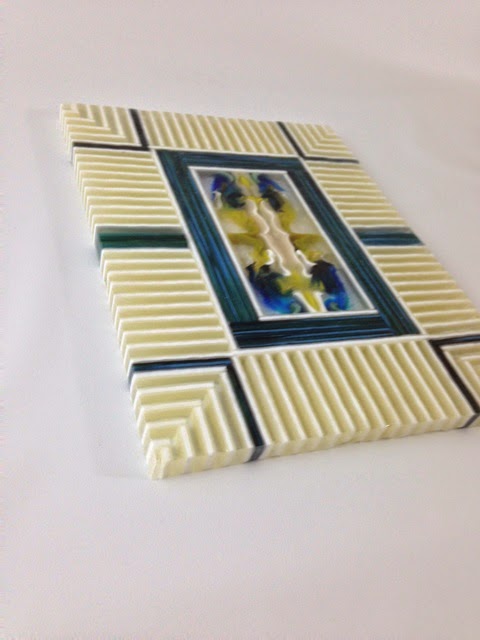 Then it was back in the kiln one more time to do a fire polish. This softens the harsh edges and will round them and make them smooth and shiny.

Now on to the next project.

I made a pot melt last year and couldn't figure out what to do with it. After returning from a recent trip from Florida, the turquoise water inspired me. I used a stainless steel ring around the original pot melt and filled it with light aquamarine transparent coarse and clear frit to create a border all the way around. After the second firing, it then went into the sandblaster to remove small bubbles and imperfections. I fired it again to get a smooth fire polish and then slumped into a bowl.

3/8” thick by 9-3/8” diameter, 2 inches tall, weighs 38.9 oz
Here is the finished bowl. I call it up to my ears in alligators. They remind me of an alligators with their mouths open. 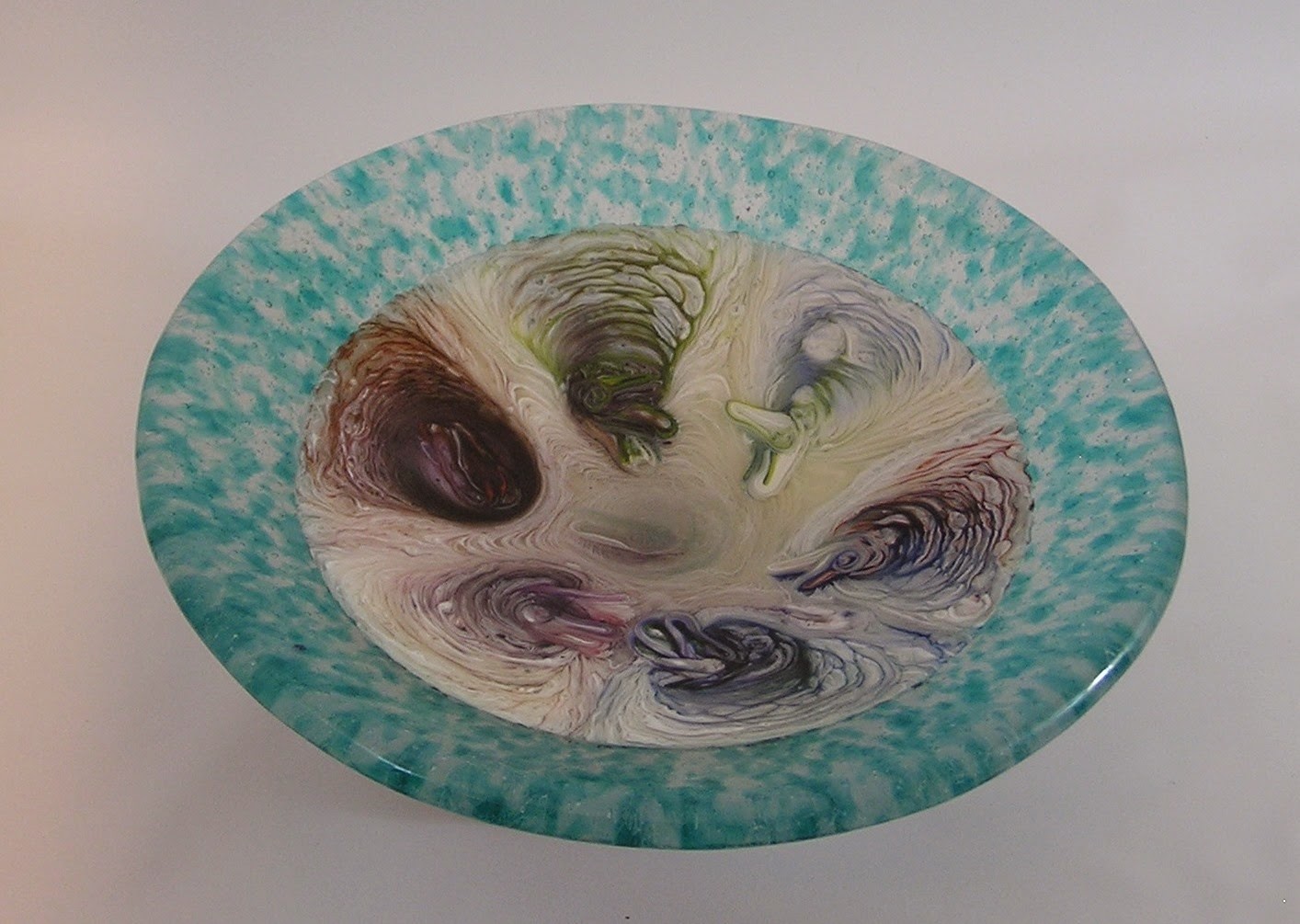 This is how it was made. There were 7 holes drilled in the pot. This was a clay pot that was used before to make another pot melt. So there was already some color in the bottom of the pot. I added mostly scraps of clear, white and french vanilla from another project. This is how it was set up in the kiln. 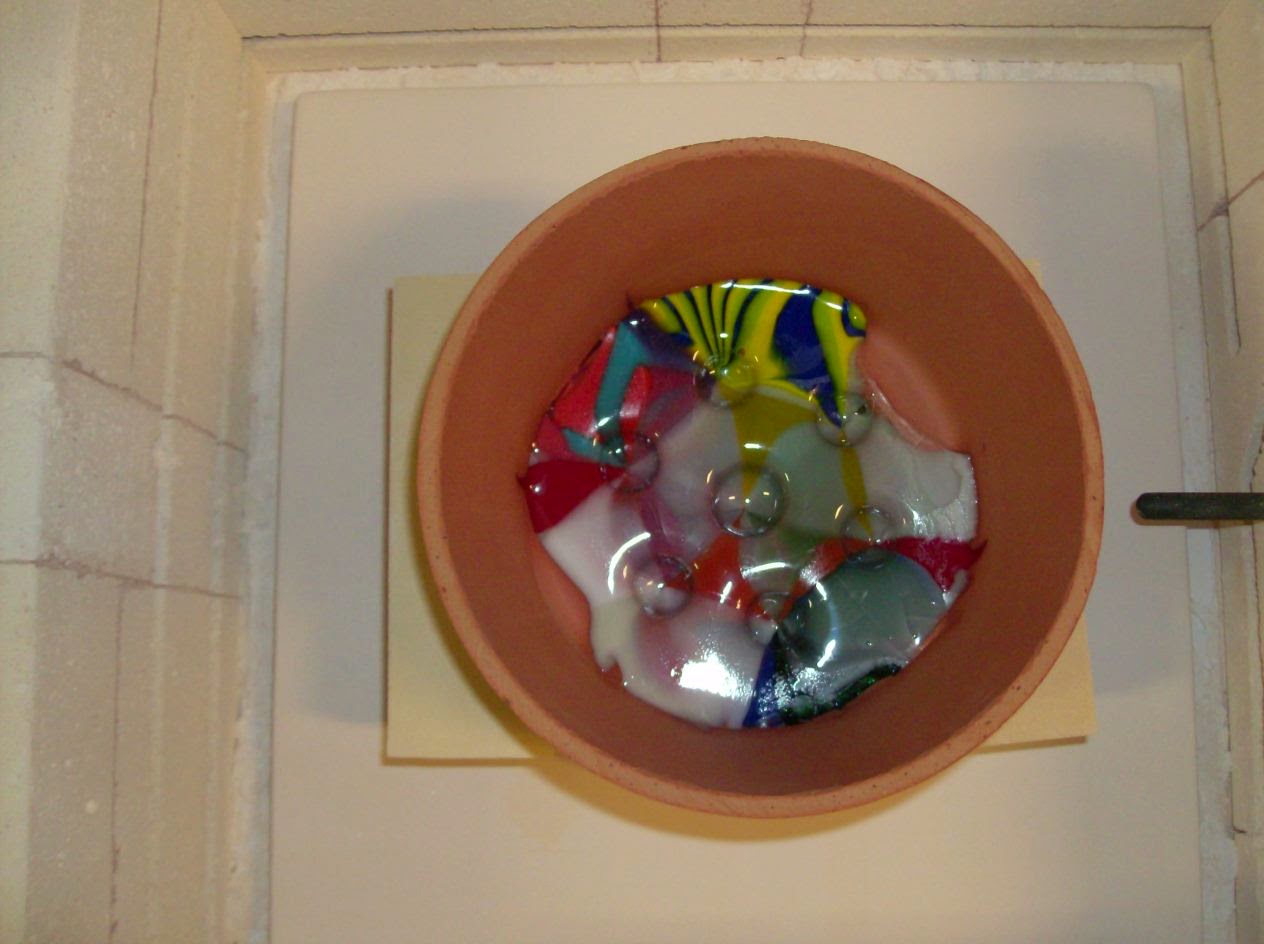 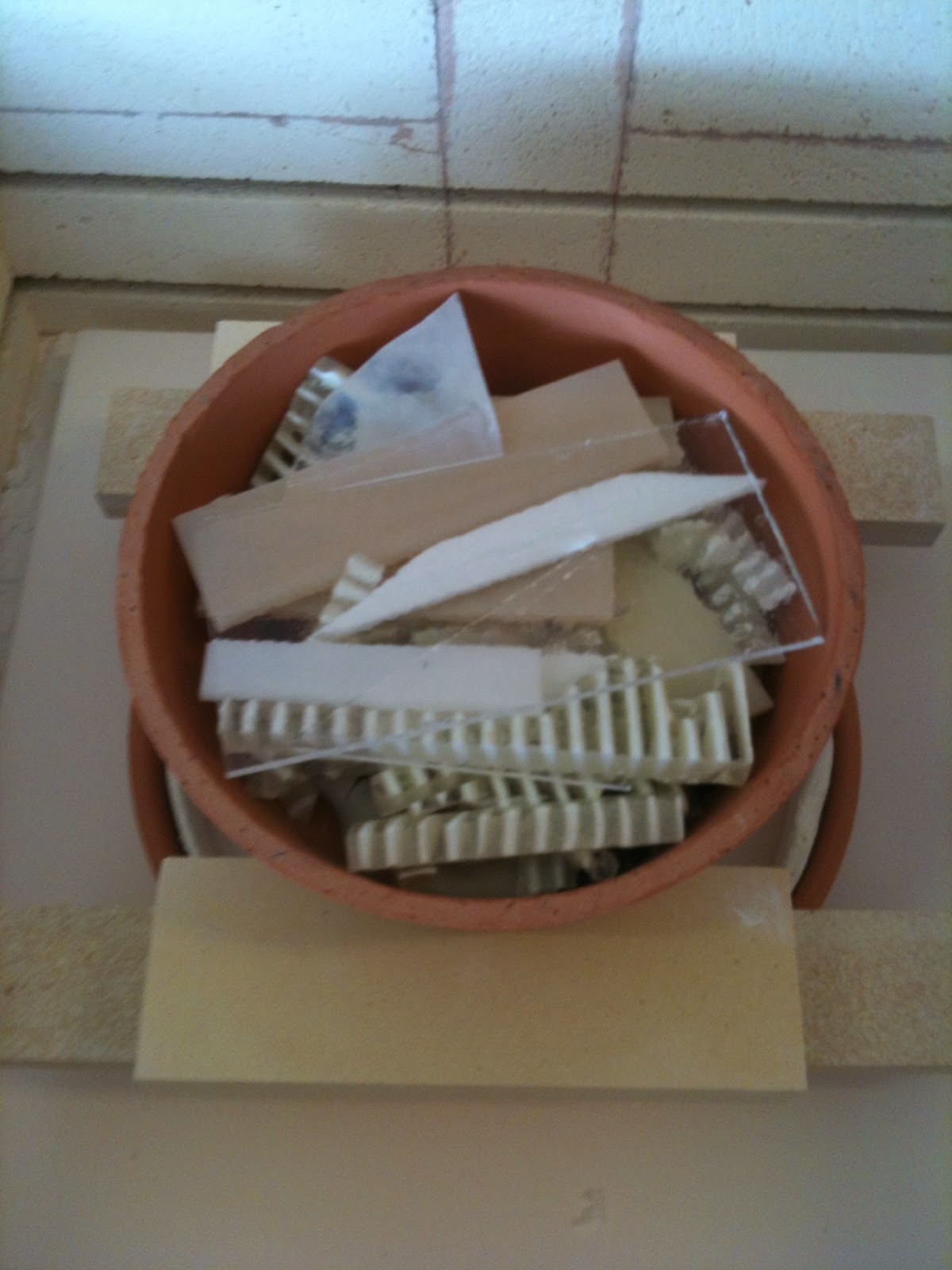 This is what the pot looked like after a long hold in the kiln. Below you can see the melt. 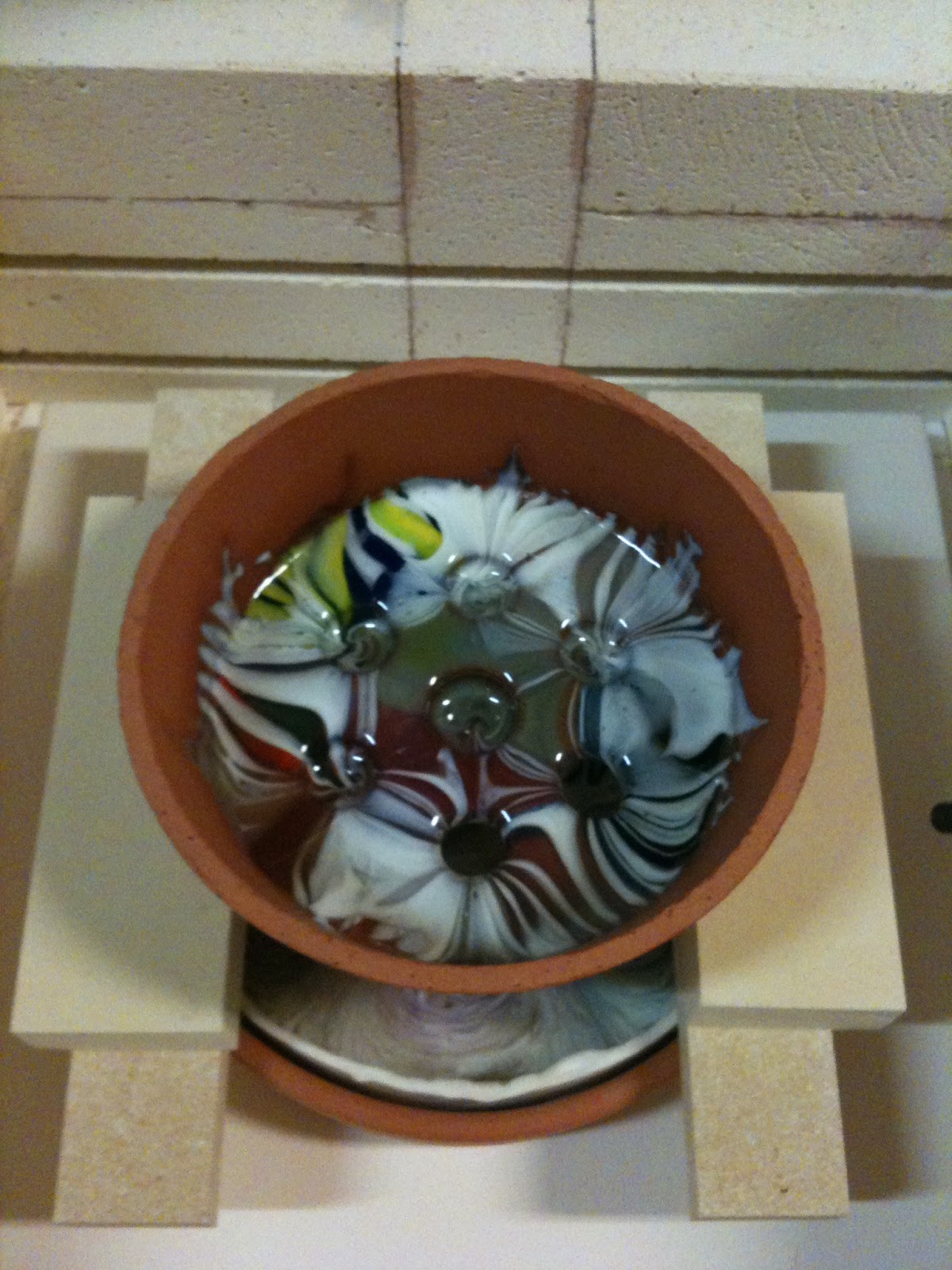 I cut the top off the clay pot using a tile saw because it was too tall to fit in my kiln. I used this piece from clay pot to contain the melted glass which I lined with fiber paper so it wouldn't stick to the pot. 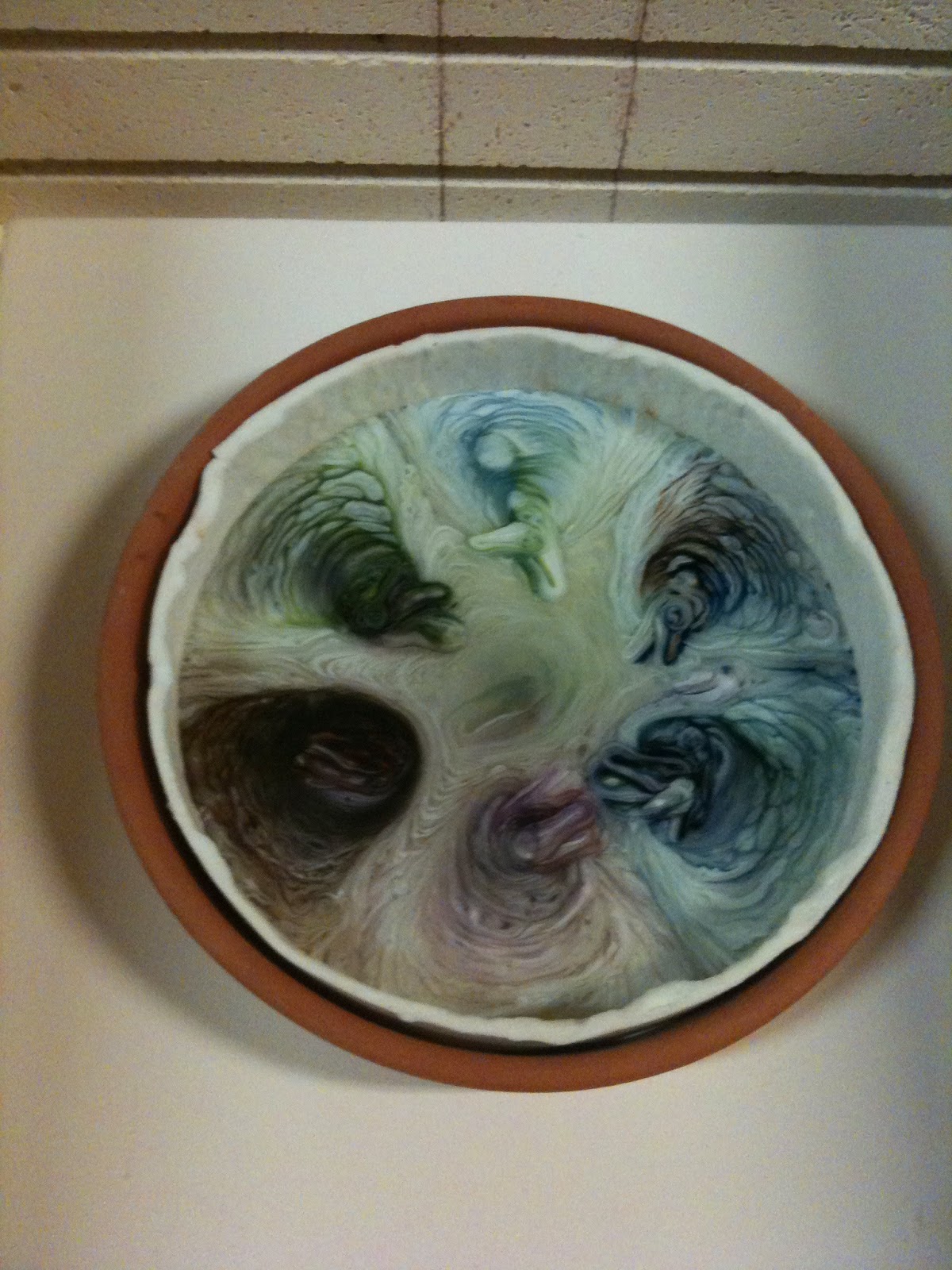 This is the piece turned over and I filled a stainless ring with clear and turquoise frit. By turning the piece over and firing it on fiber paper you get a nicer finish. After this was fired, I took it to the sandblaster to get off any imperfections. 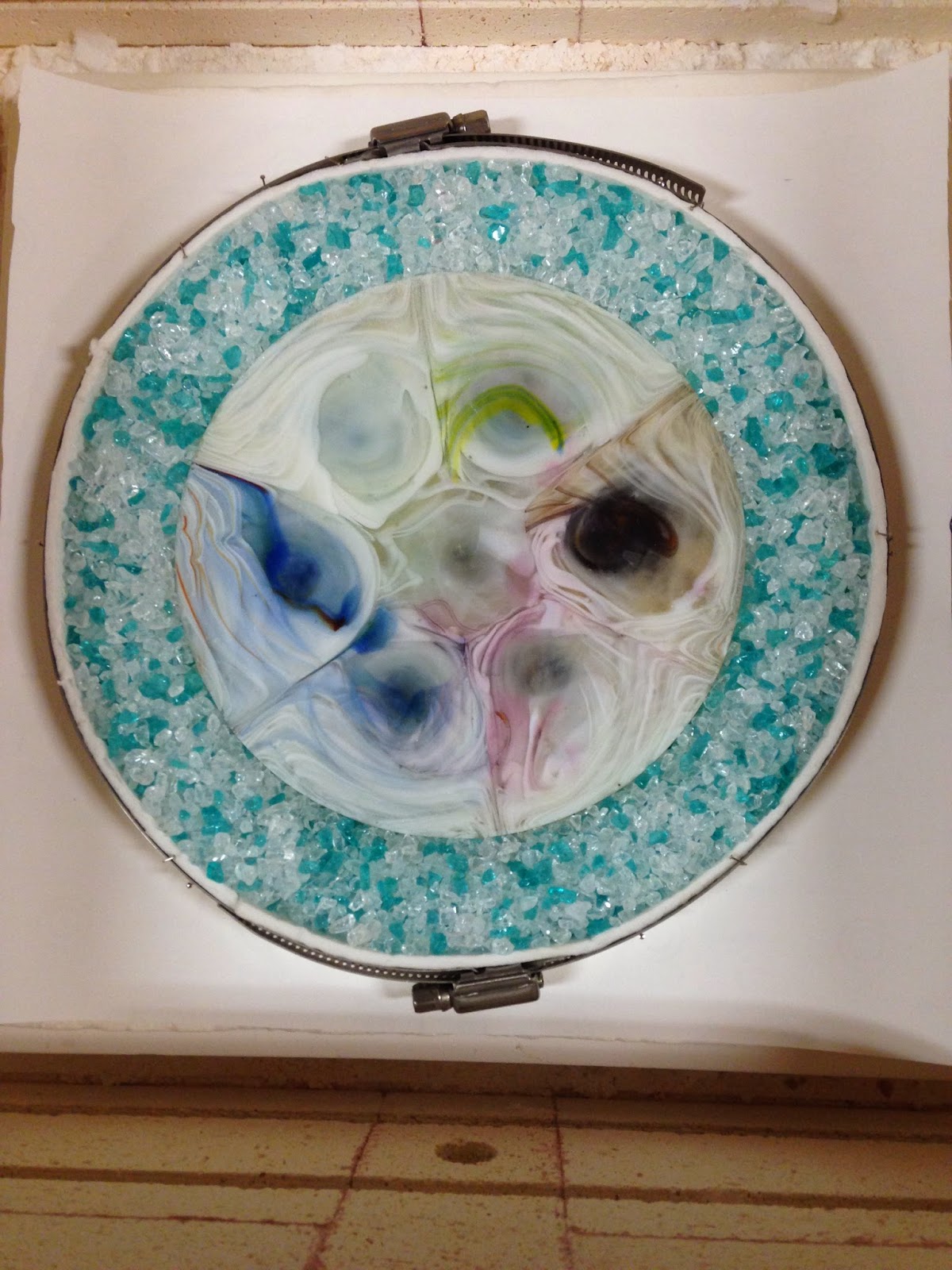 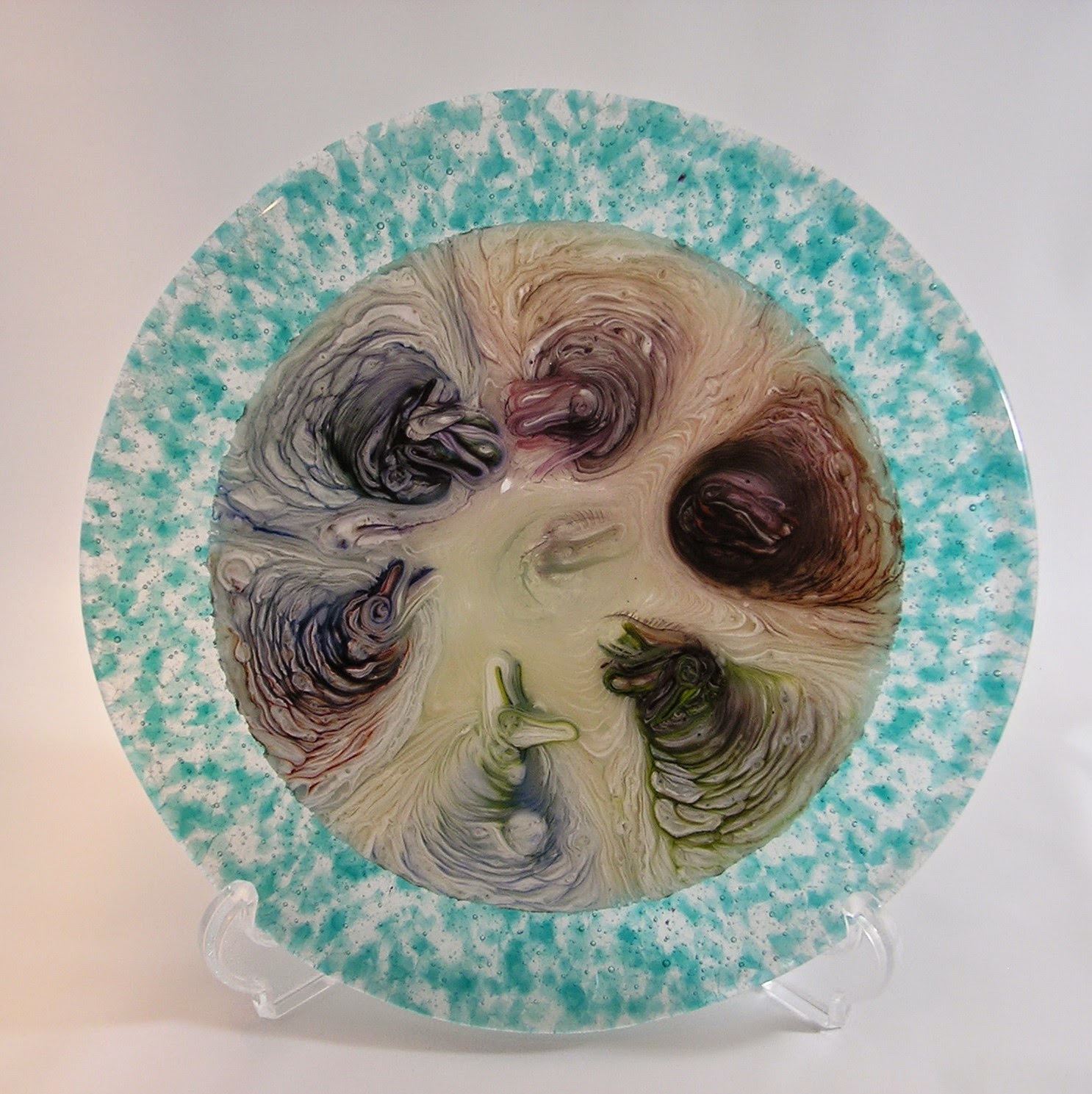 This is the back of the piece. 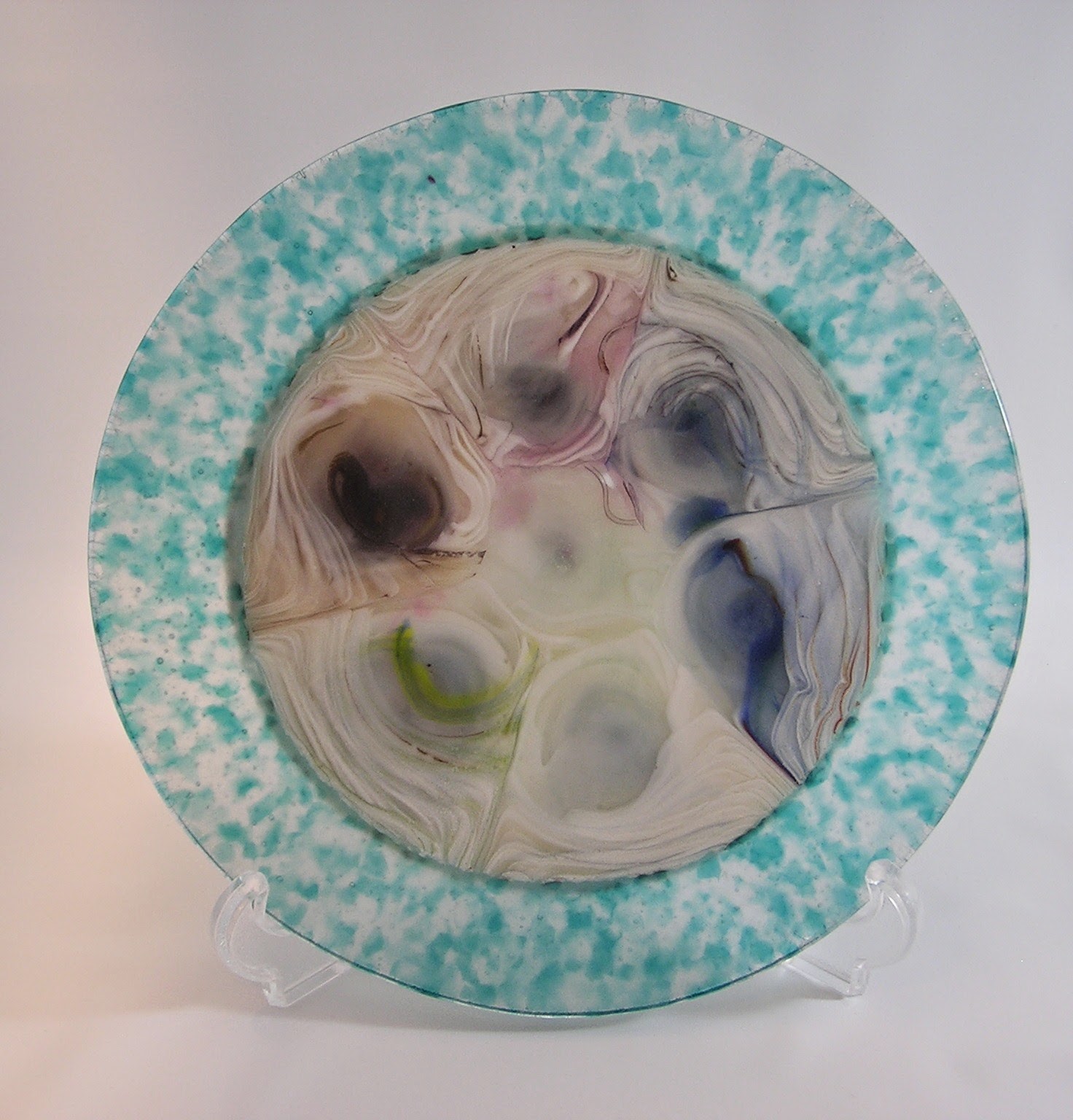 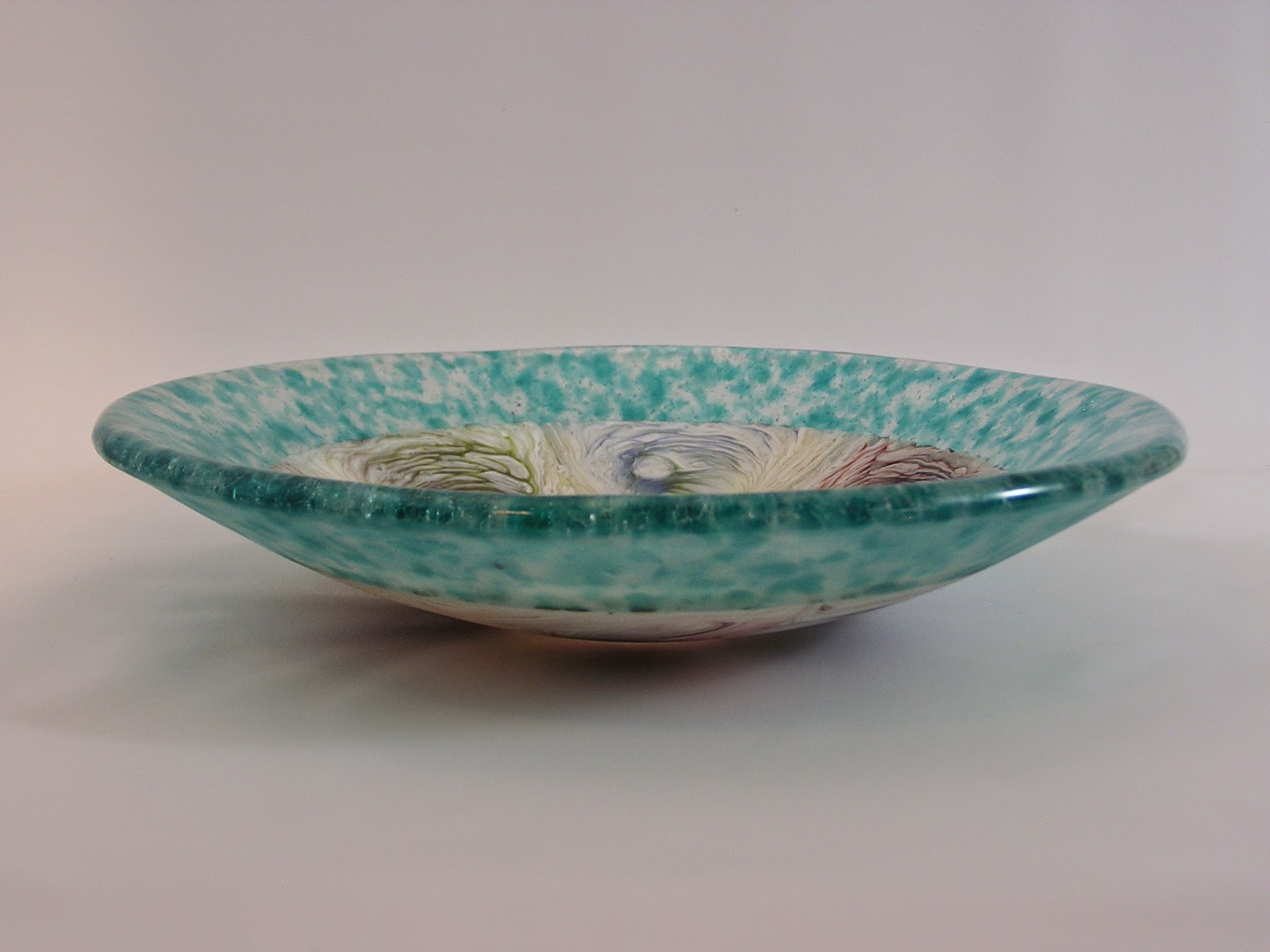 Posted by Glass Intrigues at 10:34 PM No comments:

I started this post in December but for some reason, it never posted, so here it is.
This past weekend my kiln was working overtime. I had an order for 7 fused glass snowflakes and I only had 1 done. My kiln is 14" and these snowflakes are over 5" so I can only fit 4 in the kiln at a time. Here is what they like look before and after they were fired. Mind you each snowflake has 61 pieces of glass. The main components are easy since I use a strip cutter to cut the pieces. Where it gets tricky is laying the small pieces on top, glass with such small pieces is slippery so a tiny drop of glue went on each "arm". Each one took a little over an hour to cut and assemble. The finished product looks good. I tied a ribbon around them and they are ready to hang. 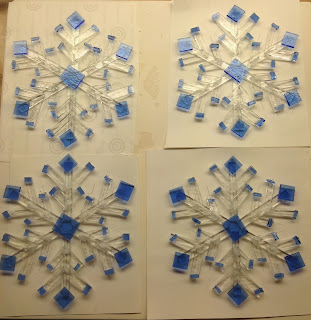 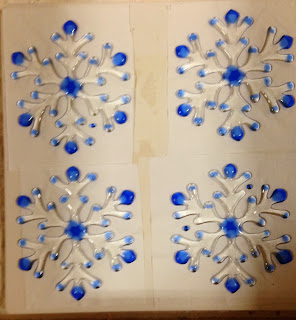 So now, the next one I made I used rainbow irid. I think it turned out very nice, here is a pic. 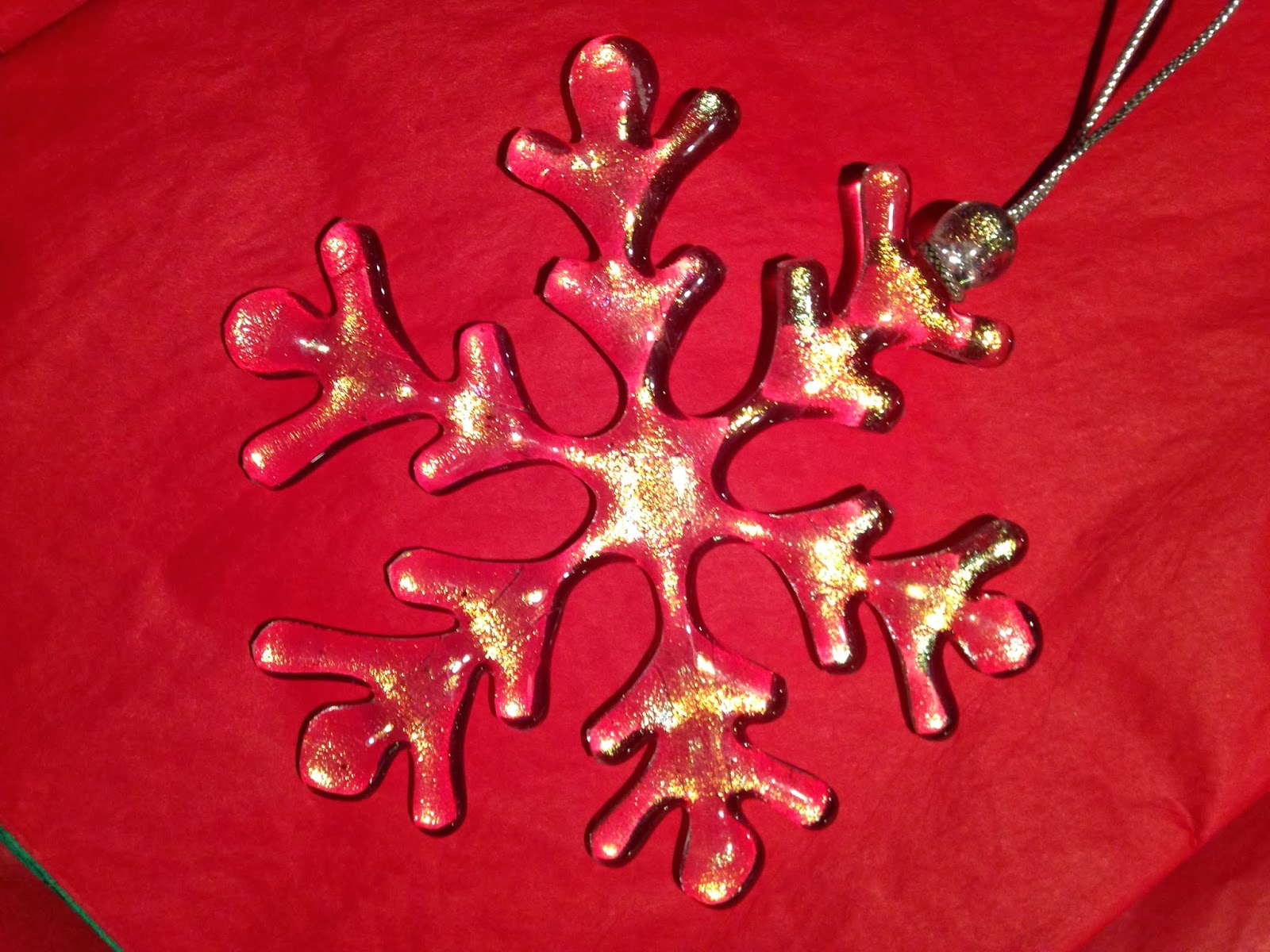